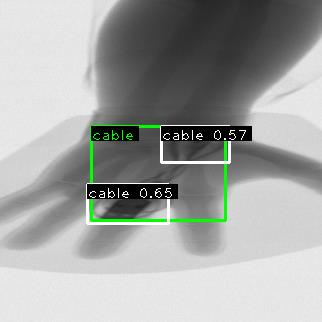 A previous research on object detection networks showed promising detection performance on contraband and showed network adaptability on detecting contraband that the network never has seen. We show methods to further improve network performance such as when the dataset is expanded and when noise is reduced in image data. Additionally, we investigated network adaptability further by evaluating contraband that are more and less prominent in images and evaluating these on the EfficientDet network. We concluded that detecting Phones and Cables contraband are still able to get good detection results when they are not included in the training set, increasing the training set size shows a predictable recall regression having characteristics of an exponential converging function, and model recall improves linearly when the digital noise is on its lowest amounts. All results show that the performance could still be increased. The performance of leaving out classes indicates that the model has potential for an anomaly detector, expanding the dataset suggests recall performance of the EfficientDet network can still improve. Finally, reducing noise further in image data shows an improving impact on the EfficientDet recall performance.